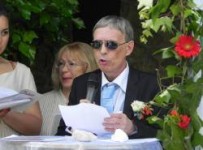 Born in Valenciennes in the north of France in 1959, Yves Herbo comes from a family of coal miners respectful of Christian traditions. Having moved with his parents to Paris in his youth, he underwent a strange religious experience around the age of nine, witnessing the emergence of a flying object like a large sphere or milky-white orb flying scarcely fifteen meters overhead.
Shortly thereafter, a passion for writing that never left him prompted him to write a novel, before beginning to write several articles and novels about alternative reality, in which some readers detect certain messages or possible visions of the future. He then focused on the UFO phenomenon and has even received his ufologist investigator badge (for two unpublished surveys) on behalf of the magazine Lumières dans la Nuit (LDLN 1975/1977).

Yves attended the François Villon School in Paris for his literary studies before beginning a 20-year career as a financial administrator within a large electronics and high-tech consortium, Thomson-CSF, now Thales. But his passion for writing, as well as for archeology, still prodded him, and he began to write science fiction anew, to which he applied his IT knowledge, gained with Atari and Commodore in the early 1980s, to the creation and adaptation of several websites and blogs, while writing numerous articles (about 2000 to date) on archaeological mysteries, history, astronomy, ufology, and the paranormal. He did some amateur caving and archaeological research in the mysterious realm of Fontainebleau, and is keenly interested also in megaliths and celts.
Yves published his two futuristic novels written as a child in 2011 and 2015, and is preparing to release a collection of stories, while updating his autobiography.
A former member of the Password Euroswap IT-teams, Delight, and Paradox (H1), Yves has written numerous articles and reviews on various sites, notably the former Newsoftomorrow.com, SerieViewer.com, Sciences-Fictions-Histoires.com, and herboyves.blogspot.com. Since 2010, he has served as Deputy Secretary of SerieViewer Association.