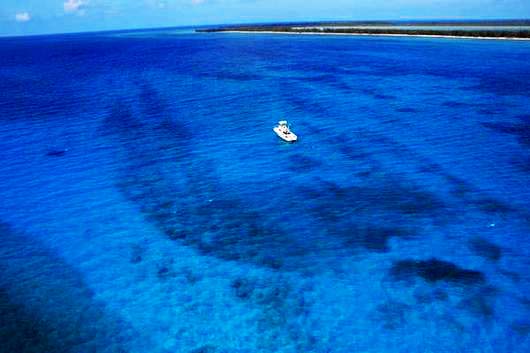 Beneath the beautiful blue waters of Bimini Island, a little more than 50 miles east of Miami, Florida, lies a submerged structure nicknamed the “Bimini Road.”

Since it was first discovered in 1968, this area has been linked to the legend of Atlantis … primarily because of famed psychic Edgar Cayce’s prediction that remnants of Atlantis would be discovered near Bimini. Although the Genesis Quest team relies on science, not psychic readings, they are keenly interested in determining the truth about this apparent ancient construction. Was it a hub for prehistoric transatlantic transit? Or merely a natural formation of beachrock?

The Bimini Road is composed primarily of large, shaped limestone blocks, including numerous right-angled and oriented features, tiers of uniform, rectangular stone structures, and large terraces. Non-native, modified granite, and marble pieces also have been found on, in between, and under the larger stones. Most tellingly of all, its “J” shape matches Bronze Age harbors found in the Mediterranean Sea, and stone anchors recovered on both sides of the Atlantic seem to match.

Archeologist Bill Donato and his colleagues were the first to study the Bimini site with submarines, improved forms of side-scan sonar, sub-bottom profiling, and other technologies. Donato himself has visited the area 24 times, as well as other submerged sites in the region.

Genesis Quest plans an expedition, led by Donato, during which the higher priority targets will be verified through measurements, photographs, and videos. The team will collect samples and artifacts for laboratory analysis in a concerted attempt to determine the truth about this apparent prehistoric harbor facility.