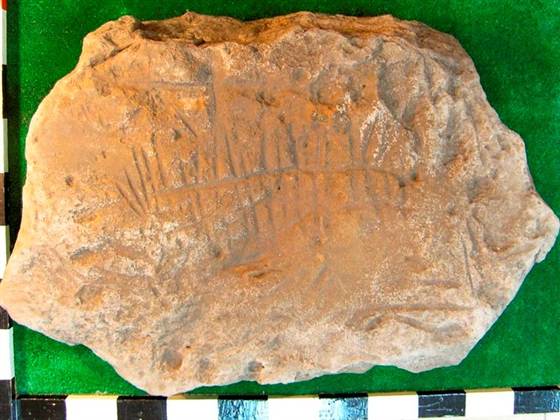 “A carved stone found marking a Bronze Age grave in the Ukraine is the oldest sundial of its kind ever found, a new study reveals.

The sundial may have marked the final resting place of a young man sacrificed or otherwise marked as a messenger to the gods or ancestors, said study researcher Larisa Vodolazhskaya of the Archaeoastronomical Research Center at Southern Federal University in Russia. Vodolazhskaya analyzed the geometry of the tire-sized stone and its carvings, confirming that the stone would have marked the time using a system of parallel lines and an elliptical pattern of circular depressions.

The elliptical pattern makes the carving an analemmatic sundial. A traditional sundial marks the time using a gnomon, a fixed vertical that casts a shadow. An analemmatic sundial has a gnomon that must move every day of the year to adjust to the changing position of the sun in the sky. [See Images of the Ancient Sundial]

Keeping time
The sundial belonged to the Srubna or Srubnaya culture, known for the timber-framed graves they left on the steppes between the Ural Mountains and Ukraine’s Dneiper River…”