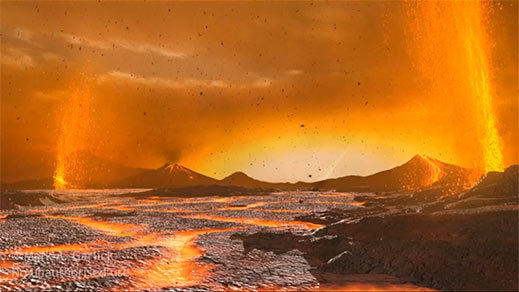 “You’ve heard the story before: if it weren’t for our friends the photosynthetic cyanobacteria, you wouldn’t be able to read this out loud because there would be no oxygen to breathe—and also you would never have existed. Oxygen-producing photosynthesis changed Earth’s atmosphere and paved the way for multicellular life, which would run around eating the photosynthetic things by way of saying thank you.

The evidence for this transition to an oxygenated atmosphere is apparent in a beautiful type of rock called a banded iron formation. The type of rock, which contains large amounts of iron oxide minerals (it’s an excellent ore), showed up in the geologic record in a big way around 2.4 billion years ago. That marks the start of the “Great Oxygenation Event,” when oxygen levels really started to take off.

But that oversimplifies the story. Microbial life had already been around for over a billion years at that point, and there’s good reason to think that photosynthesis developed pretty early on. There are even a few older banded iron formations, though the oldest may not have required an oxygenated atmosphere. The early history of oxygen—how much was around and how much it fluctuated—is not so clear. A recent study adds to that history by examining some nearly three-billion-year-old rocks in South Africa.

The technique used to suss out evidence for oxygen’s presence is the same as a similar study we covered several years ago. When oxygen reacts with some elements, it leaves a mark that can be preserved in the rock record. In minerals, chromium is mostly found in a +3 state (that is, three electrons short of a neutral charge). In that form, it doesn’t dissolve in water very readily. But when chromium reacts with oxygen (and manganese), it loses three electrons and enters a +6 state that is much more mobile in water.

That transformation is hardly indelible, obviously. Other reactions can convert it back to a +3 state. In order to find preserved evidence of this activity, you have to look at the isotopes. It turns out that the oxidation reaction tends to prefer the extra-neutron-bearing chromium-53 over the slightly more svelte chromium-52. That means that the mobile +6 chromium has a greater frequency of chromium-53 atoms, and the +3 chromium that gets left behind is missing some….”