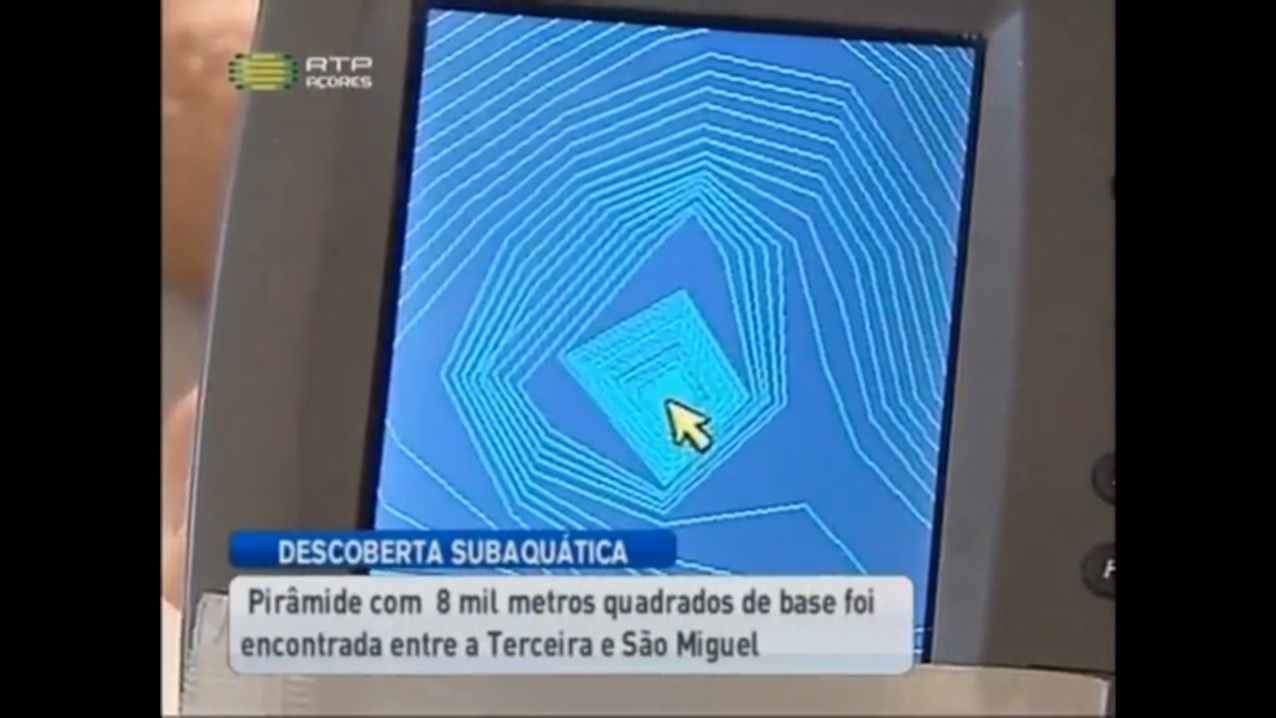 Under water pyramid off the Azores islands? “An apparently man-made pyramid oriented to the cardinal directions has been identified by sonar at a depth of approximately 40 metres (130 feet) under water off the Azores islands. See here for a video (Portuguese commentary) of the discovery: http://videos.sapo.pt/9j3fd6z5h8cVMiBr5sUa. The location is between Sao Miguel and Terceira (the biggest Azorean Islands) and it also lies close to this underwater volcano:http://en.wikipedia.org/wiki/Dom_Jo%C3%A3o_de_Castro_Bank.

Many thanks to Pedro Branco, Eduardo Costa, Viviana Lopes, Daniel Mendes, Jo Anne Taisbin and others who have messaged me to tell me about this. The name of the discoverer, featured in the video, is Diocleciano Silva. According to the video the discovery was made five months ago but there has been minimal international coverage up to now. Eduardo Costa and Daniel Mendes both sent me a link to this short article on the subject in English:http://gregdougall.wordpress.com/2013/09/21/an-undersea-pyramid-has-just-been-discovered-in-the-azores/. Pedro Branco has just sent me two further links: http://www.liveleak.com/view?i=c16_1380022655&comments=1 and:http://beforeitsnews.com/beyond-science/2013/09/giant-underwater-pyramid-found-near-azores-island-associated-with-atlantis-portuguese-navy-investigating-2443658.html. The latter story states that the Portuguese navy is investigating. And Mario Belo Pedro sent this story from the Portuguese-American Journal: http://portuguese-american-journal.com/terceira-subaquatic-pyramidal-shaped-structure-found-azores/

Looks like I might need to get my wetsuit on again! I wasn’t planning any further diving research for the sequel to Fingerprints of the Gods but if this checks out I’m there! In general what we know about rising sea levels at the end of the last Ice Age (see my book Underworld for detail) tells us that lands now under 40 metres/130 feet of water were submerged more than 12,500 years ago…”