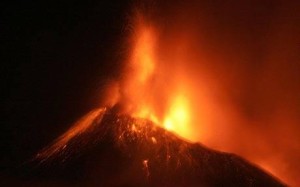 “An inscription on a 3,500-year-old stone block from Egypt may be one of the world’s oldest weather reports—and could provide new evidence about the chronology of events in the ancient Middle East.

A new translation of a 40-line inscription on the 6-foot-tall calcite block called the Tempest Stela describes rain, darkness and “the sky being in storm without cessation, louder than the cries of the masses.”

Two scholars at the University of Chicago’s Oriental Institute believe the unusual weather patterns described on the slab were the result of a massive volcano explosion at Thera—the present-day island of Santorini in the Mediterranean Sea. Because volcano eruptions can have a widespread impact on weather, the Thera explosion likely would have caused significant disruptions in Egypt.

The new translation suggests the Egyptian pharaoh Ahmose ruled at a time closer to the Thera eruption than previously thought—a finding that could change scholars’ understanding of a critical juncture in human history as Bronze Age empires realigned. The research from the Oriental Institute’s Nadine Moeller and Robert Ritner appears in the spring issue of the Journal of Near Eastern Studies.

The Tempest Stela dates back to the reign of the pharaoh Ahmose, the first pharaoh of the 18th Dynasty. His rule marked the beginning of the New Kingdom, a time when Egypt’s power reached its height. The block was found in pieces in Thebes, modern Luxor, where Ahmose ruled.

If the stela does describe the aftermath of the Thera catastrophe, the correct dating of the stela itself and Ahmose’s reign, currently thought to be about 1550 B.C., could actually be 30 to 50 years earlier.

“This is important to scholars of the ancient Near East and eastern Mediterranean, generally because the chronology that archaeologists use is based on the lists of Egyptian pharaohs, and this new information could adjust those dates,” said Moeller, assistant professor of Egyptian archaeology at the Oriental Institute, who specializes in research on ancient urbanism and chronology.

In 2006, radiocarbon testing of an olive tree buried under volcanic residue placed the date of the Thera eruption at 1621-1605 B.C. Until now, the archeological evidence for the date of the Thera eruption seemed at odds with the radiocarbon dating, explained Oriental Institute postdoctoral scholar Felix Hoeflmayer, who has studied the chronological implications related to the eruption. However, if the date of Ahmose’s reign is earlier than previously believed, the resulting shift in chronology “might solve the whole problem,” Hoeflmayer said.”…