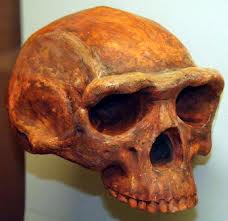 “ONE of our closest long-lost relatives may never have existed. The fossils ofAustralopithecus sediba, which promised to rewrite the story of human evolution, may actually be the remains of two species jumbled together.

The first fossils of A. sediba were found

at Malapa, South Africa, in 2008. At 2 million years old, they show a mix of features, some similar to the ape-like australopithecines, others more like our genus, Homo. To its discoverers, this hotchpotch means A. sediba was becoming human, and that the Homogenus first evolved in South Africa, not east Africa as is generally thought.

But a new analysis suggests A. sediba didn’t exist. “I think there are two different hominin genera represented at Malapa,” says Ella Been at Tel Aviv University in Israel. One is an Australopithecus and one an early Homo. We can’t yet tell if the australopithecine remains are distinct enough to call them a new species, Been says.

Been studies the spinal columns of ancient hominins, so she was curious when a paper was published last year focusing on the spine of A. sediba(Science, doi.org/r7k). There are fragments from two skeletons at Malapa, a juvenile male and an adult female. Looking at photographs of the vertebrae, she noticed familiar features on the young male.

“I realised they looked a lot like the vertebrae of the Nariokotome Boy,” she says. Also known as Turkana Boy, this is a 1.5-million-year-old skeleton ofHomo erectus, a widespread species that may be our direct ancestor. Its vertebrae, like ours, are much wider than they are tall.

In contrast, the adult female’s vertebrae are taller, says Been, a classicAustralopithecus feature. She concludes that the spines belong to two different species.

When Been shared her findings with Yoel Rak, also at Tel Aviv University, she found an ally. “He sees the same in the [lower jawbone]: an australopithecine and an early Homo,” says Been. But here the species are switched: a notch in the young male jaw looks like Australopithecus, while the same notch in the adult female jaw looks human.

The pair conclude that there are not two but four individuals in the remains from Malapa: an adult and a juvenile of both Homo and Australopithecus. They presented their findings at a meeting of the Paleoanthropology Society in Calgary, Canada, this week…”